Can’t you hear it ringing in your head?

And so I told my children. Emphatically as well, of course.

Talking to a stranger.

Headline news, as you just read…

Mother of many children talks to a Stranger!

Late afternoon errands are the worst because I am always in such a rush. Aren’t you? The air was heavy and the traffic sounds passed back and forth as I stood propped up by my car as I pumped the gas into it.

Again. I was stopped from my rushing. Looking, I saw an elderly man in the bay adjacent to me.  He was also pumping gas.

The fragrance over powered and delighted at the same time.  Wild Concord grapes.  So out of place. So unexpected. I almost felt guilty in the sniffing!  Feeling almost drunk on the sweet earthy smell, I couldn’t resist.  I just had to comment to the stranger in the next bay over.

I leaned a bit forward and exclaimed, “Can  you smell it?”

The old man was a bit caught off guard.  Then he lifted his chin, turned his nose toward the scent and took in a big sniff. And he smiled in wonderment. “What is it?  I thought I smelled something…” he said.

“Wild Concord grapes…see the vines over there?” I said, as I pointed into the wooded area. Clearly, I was too excited.

And the Holy Spirit began the prompting and the telling. 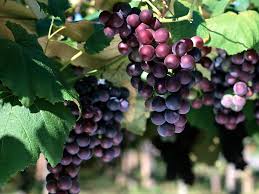 “This sweet fragrance is the visual I want for you to see today. These Wild Concord grapes are the picture of the sweetness of relationship that God desires to have with you, today and everyday.  Come close and lean in,….See? God delights in you even more than you delight in the wild fruits! Come close and lean in and offer up praise to your Father.”

Visibly I saw God as a loving Father who delights in his children.

Giddy, I delayed getting back in my car, lingering in the fragrance….

One thought on “Mother of many children talks to a Stranger”